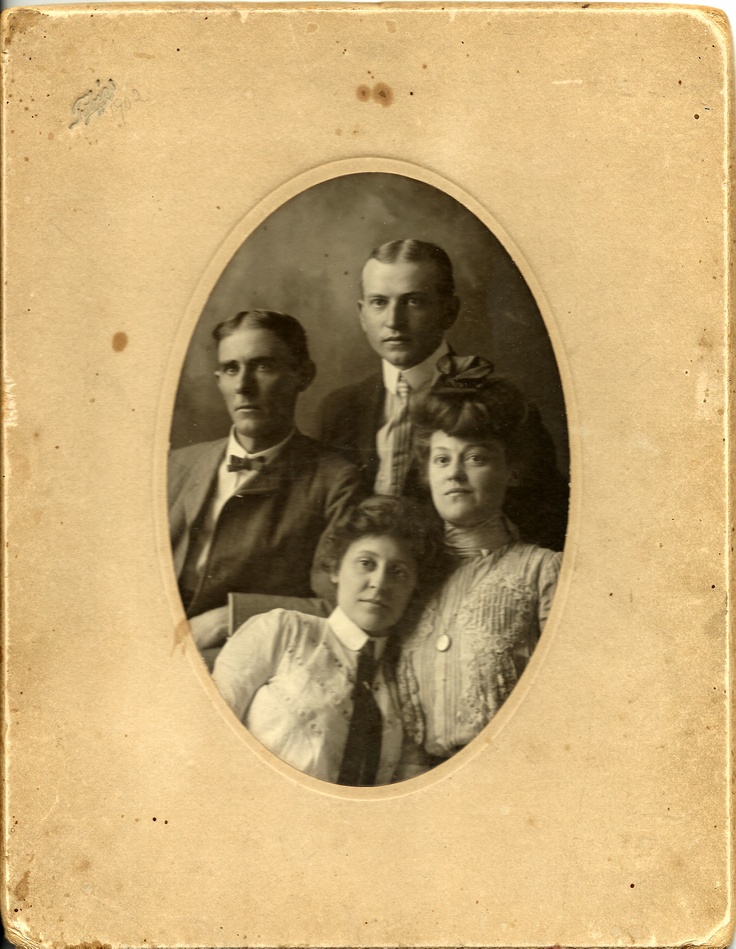 The taller man, thin, has lines from patrician nose
to stern mouth. Eyes alert for any nuisance,
slight greying of sideburns, neatly clipped.
Ears close to head, as if by military command.
His coat is dark grey, fitted to the body. Shirt, high collared,
set off by necktie of silver silk. Waistcoat vested in stripes of grey
and black. Elbow crooked, posture straight.
Evidence of a watch (simple gold chain hooked from
vest pocket belt loop), a family heirloom.

The next man is young & hefty, built like a soccer player.
Hair parted down the middle, a Sheik. Eyes glint,
ladies’ man, man’s man. Shoulders strain against vest seams.
He hasn’t bothered with a jacket, it would sear in this
summer’s heat. That is his glass on the oval table,
a slice of lemon in gin, cut glass prisms shine.
He seems ready to spring forward, to enlist at once
upon hearing Call to Country.­

Woman, seated in wing-backed chair of burgundy velvet.
Complicated lace circlet haloes her braid-crownéd head.
Square-jawed, like her son, she stares to the side
(a momentary wish to escape the photographer’s record)
Small hands clasp together, monograph in delicate blue
barely visible on the lower corner of a wispy handkerchief: M
The suit is lamb shanked at the sleeves, skirt long,
feet invisible underneath. She will not stray, despite
unrelenting desires. Sitting on the rug beside her is
a small dog, Cocker mix, laughing into eternity.

The little girl, recently entering her seventh year, has
hair plaited so severely that she frowns at
tense loops, tied up with dark blue bows.
She stands next to the chair, elbow leaning
on a richly padded arm, head tilted toward her mother.

Her skirts are full, petticoats flounced with embroidery.
In her right hand is a toy, a spinning top, circled
with gold, an H.G. Wells space ship she dreams
of riding on cricket sounding nights in her solemn bed.

She will not be still long. It is 1915 & this child
will grow into an educated woman. Her many
scrapbooks fill with photographs & poste cartes
from Cairo, Ethiopia, Arles, St. Petersburg,
Rio & the Grand Canyon. Letters in sharp
fountain-penned script address her by nick name:
“Peach! Missed you in Pah-Ree! Hurry Home!”
and “With deep sorrow, we join you in mourning
the death of your belovéd brother,
heroic pilot in the War to End All Wars.”

Yet she will live to see other wars & live long
enough to pass into another Century, riding
with nephews & nieces (she would never
have children of her own) in faster & faster
moving cars.

She thinks “Slow down,” as years pass;
but the pocket watch left
her by that boisterous, dear brother ticks
menacingly, so she shuts it into the locked
center drawer of a walnut chest built for her
by a fond Admirer. His rough hands planed
wood into sweet curves. He told her it was
shaped like her body, round & lovely.

“I will lie down for a few minutes before dinner,”
she thinks but just then her spirit gently shifts
(sliver of ice moving over a slice of lemon)
& she floats over the roof of the family home;
swiftly into lavender twilight,
gold at the horizon from a sighing autumnal sun.