Beatlemania hit America when I was eleven. “She Loves You (Yeah, Yeah, Yeah)” conquered the airwaves but I was not impressed. I was in the sixth grade and had been playing flute for two years. My parents set up private lessons for me with a flautist in Bryson City, North Carolina. The tutor was our dentist. He could really do some great jazz riffs. My friend Ivan Gibby and I learned a lot from him.

“What’s so great about that song? It’s only three notes! Anyone could play that! Why are girls at Beatles concerts screaming like a werewolf was chasing them? Buddy Holley and the Crickets are way cooler!” I expressed my opinion loudly to my Beatle frenzied class-mates.

Six girls in the sixth grade were my pals. Three of them could sing wonderfully. Bryson City’s school had a great symphonic band, and a marching band. I played in both.

“For the next rainy day show, let’s be the Beatles.” I suggested, as we girls chatted during lunch one day.

The school held talent shows on rainy days when recess was not an option. I had in mind a parody but didn’t realize my friends were serious about their Beatle Love.

We practiced during recess, my beautiful friends singing in perfect harmony. They got three songs down: “She Loves You,” “PS, I Love You” and “Love Me Do.” I was to be Ringo, so I practiced belting out rhythms on tree stumps with sticks the band teacher loaned me.

I spent hours making Beatle wigs from black yarn, sewn with care onto run-streaked stockings Mom gave me. I made four, one for myself and one for each singer.

“We have to wear the wigs or nobody will know we’re being the Beatles!”

The girls, all with perfect bubble hair-dos, refused at first to mess up their sprayed coiffures but my upbeat excitement finally convinced them.

A rainy week came and the mimeographed memo went out, announcing an end of week talent contest. On Friday, students from all twelve grades were ushered into the huge auditorium. The principal asked everyone to be quiet and enjoy the show. Kids from primary grades acted out skits about how it’s healthy to drink milk. Each grade had skits, singers, kids reciting the Gettysburg Address and other acts.

Finally, it was the sixth grade’s turn. Three boys sang a great rendition of “Walk Like a Man.” They were classy in burgundy and gold blazers, our football team’s colors. They snapped their fingers in time to the music.

Backstage, we four girls put our wigs on, helping each other hide our real hair underneath the stocking caps. I put on one of my brother’s dark colored jackets, to look like a well-dressed Ringo Star. My friends wore lovely shirt-waist dresses. The wigs made us giggle.

I walked out first onto the expansive stage, sat down in a chair, grinned widely, and held up my drum sticks, clacking them together.

After the hum of a pitch pipe, my friends began harmonizing with “She Loves You.” They sounded beautiful. I pretended to slam on fake drums, keeping the beat. Kids applauded. Fantastic! My friends segued into the second song. I got worked up and beat out a more frenzied rhythm, closer to Gene Krupa than Ringo.

On the last song, I flanged my head around, making the wig’s fake hair fly as my hands drummed wildly. I made full use of the imaginary drum set, brushing a snare drum snazzily, tapping my foot for the bass and rat-a-tatting on the high hat.

Students and teachers laughed at my antics. My friends, one by one, turned around and saw me crazily drumming. All gave me furious glares but continued singing and finished “Love Me Do.” Then all three girls stalked off the stage, leaving me alone. I was still drumming, caught up in the act. Ringo had invaded my entire body.

Suddenly, I looked up and saw the whole audience standing and applauding. Some teenaged girls grabbed their hair and screamed, pretending to be Beatle maniacs. Even teachers stood and cheered: “Encore!”

Realizing I’d gone too far with the Ringo imitation, I gestured for my friends to come back. They all had removed the Beatle wigs and fixed their hair with copious amounts of Aqua Net. They took their time but did return to the microphone. They 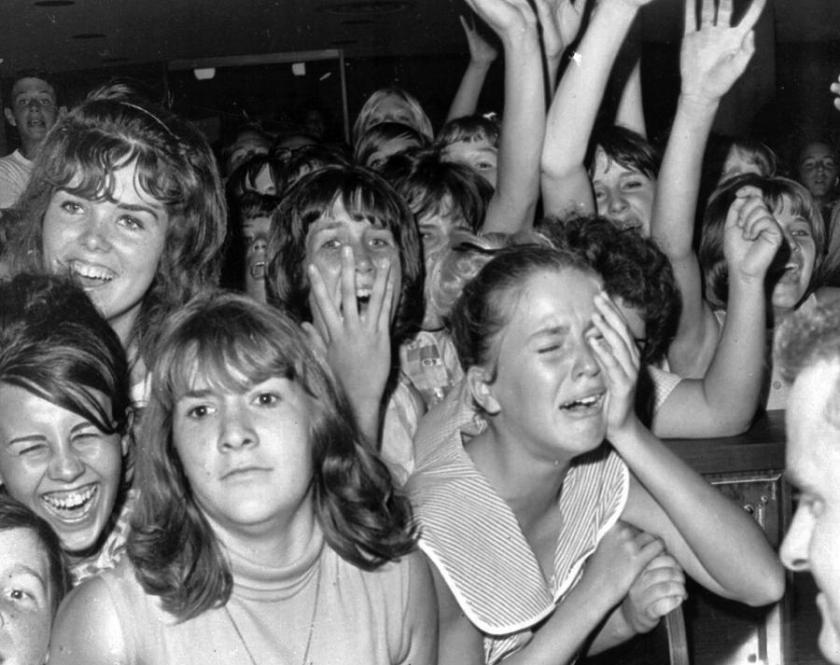 sang “Johnny Angel” tragically. I sat in the chair, smiling, hands in my lap. My friends got their own personal applause.

The principal walked out onstage and handed a blue ribbon to each of us. We’d won first prize! The Beatles had landed in North Carolina!