It had been three months since I’d slept more than two hours a night. I’d lie in bed, heart running a thousand miles an hour, shaking & hoping my husband wouldn’t notice. Often, over nothing at all, I’d break into fits of uncontrollable giggles. Hilarity filled my head with a wild high no drug could reproduce. I’d slide out of bed and leave the house to keep from awakening Peter. Laughter pealed out of me as I struggled to keep it down, walking around and leaning against trees for balance.

My husband was determined to have me locked up in a loony bin, instinct warned me. When I told him “I am underwater” or “I’m in Dream Time like Australian Aboriginals,” he looked at me as if I were a lab chimp. I couldn’t understand the words he spoke but they were sharp shards of glass, cutting into my flesh. You must escape, my broken mind urged.

At 15, I was reading a biography of George Gordon, Lord Byron.
“This is what I have,” I told my father–holding the huge library book out to him. “It’s called manic-depression.”

“You’re not crazy. You’re a poet.” Dad stated firmly. He rattled the newspaper, a sign that the conversation was over.

Then I read a book about Zelda Fitzgerald. I identified with her artistic struggles, wild youth & attempts to become a ballet dancer. It seemed that F. Scott had purloined the best of Zelda’s personality to use in his novels, draining her of life.

I did not want to die in a madhouse conflagration, as she had. My worst fear is of fire and my second worst is of being put in an insane asylum. So I ran away from Peter, just as I’d left my parents’ home when I was seventeen, to live in a crash pad.

My teen-aged true love’s Dad was off the tracks. Wacko. He worked night shift at a Jim Beam distillery, not far from the house in which the family dwelt. The owners were nowhere to be found, so they lived there in peace for years. It was a Victorian with a wrap around porch, in disrepair. Although RW and his brothers constantly tried to shore it up, the house leaned precariously. Just like Mr. P’s mind.

The Old Man (as his kids called him) was a hardcore alcoholic. So working at a distillery was his dream job. He was paid for boozing. Unfortunately, Mrs. P would get phones calls in the dark of night, from her husband’s coworkers.

“He’s fallen off the cat walk. Come get him.”

Mrs. P was a wonderful, jolly, lovely Irish woman. She put up with far too much from her souse of a husband. Being Catholic, she didn’t believe in divorce. When those late night calls came in, she’d wake up one of the boys, often Robert W..

“Please go work your father’s shift.” The kids all slept in one huge bedroom, on three king-sized mattresses. One or the other boys would stumble out of bed, walk a few miles to Jim Beam, pick up the father and drag him home. He’d fall into bed, snoring away. Then the hapless son would work whatever was left of his father’s shift.

Mr. P took an instant dislike to me. Just as my father hated Robert W. at first sight.

My father cleared his throat. A sign the conversation was over until next time he saw me with my ill-fated beau.

True Love! RW & I met while swimming in Lake Fairfax. I dove down to the murky bottom, then soared up out of the water like a porpoise. During one of those leaps, a boy appeared.
“Wanna Rock?” he asked, holding up a huge, smooth stone.
We both laughed. We were 14 years old & in love from that day forth. 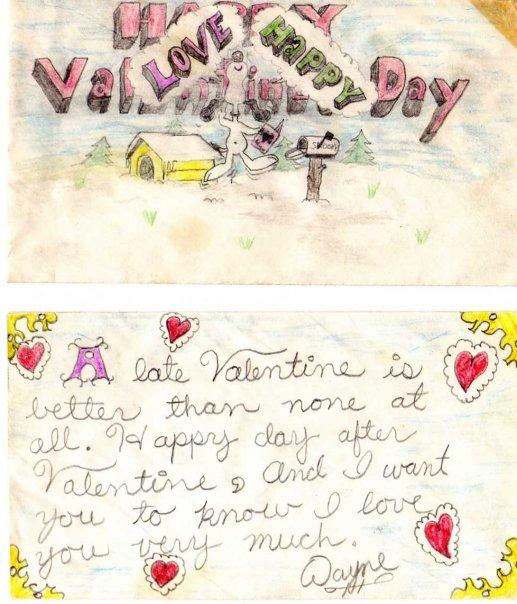 Card RW drew for me on the spot after I threw an “Irish temper fit” because he forgot Valentine’s Day. We’d been dating for 2 years by then.